San Diego and The Art of Letting Go

While I’ve always felt a magnetic pull towards San Diego, I couldn’t have imagined that my first visit would be the result of an unexpected breakup. I originally planned to see the city with a partner and instead found myself with a single round-trip ticket and a wounded heart. My saving grace was that this was the second solo trip I would take due to this breakup; I had just returned from Austin, where in the midst of my emotional turbulence I was somehow able to find solitude.

Drawing from the confidence of my recent self-discovery, I mustered the courage to get on the plane and fly cross-country to stay with a friend of a friend’s friend, whom I’d never met nor communicated with other than a few email messages. Because why not.

I pictured San Diego as an American oasis: perpetually sunny, warm, carefree, and untouched by the stresses of corporate life. This was, in fact, my first impression. The second I stepped out of the airport and into San Diego’s crisp, sea-salt coated air, I breathed a little easier. I didn’t realize how badly I was feeling stifled by a pain that I could not – and would not – let go.

During the next few days, thousands of miles from my problems and the people who catalyzed them, I found myself questioning why letting go of what hurts us is such a difficult process.

My time in San Diego taught me a very valuable lesson: the biggest obstacle to being unable to let go is not wanting to. While suffering is a decision that we can walk away from, we too often choose to tightly grasp onto it because it is comfortable and validates our pain.

It was here, in San Diego, that I began to learn the art of letting go. 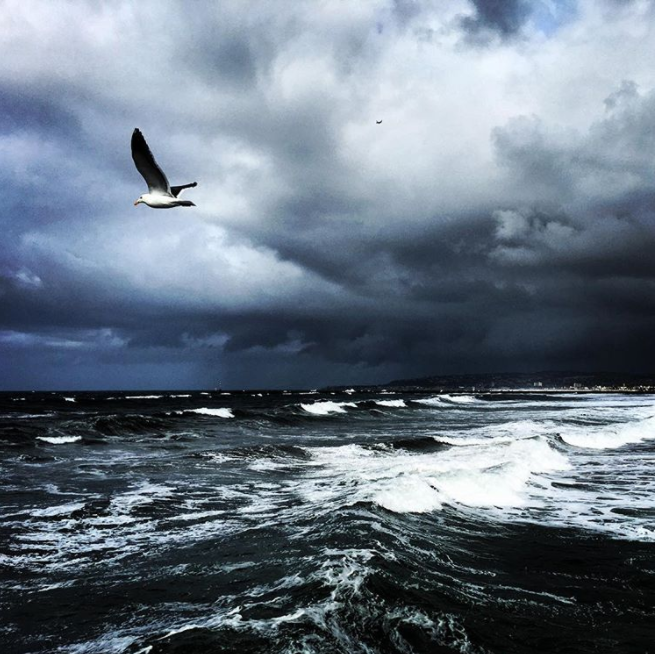 My first morning in San Diego greeted me with stormy winds and a tempestuous sky. My determination to stay indoors until the storm passed was quickly interrupted by my host, who excitedly ran into the house exclaiming that I must see how high the waves were crashing at the pier. Hesitantly, I grabbed my jacket and went along.

A few minutes later we were watching wave upon wave angrily swallow one another in frenetic competition to the shore. The sight was arresting: an agitated Pacific ocean snarled at a dark, cloudy sky, forcefully strewing aside any subject in its way (including a determined seagull and a very brave surfer). The wind sheared through my bones as if purposefully stripping me of any concern other than hugging my peacoat a little tighter to my chest. I wouldn’t have been surprised if a giant wave had come right then and engulfed the entire pier.

I must admit I was a bit disappointed. Here I was, in a city notorious for its beautiful, sunny weather, only to find myself surrounded by turbulent skies. I subtly resented the poetic justice that this weather could so appropriately mirror my internal state of being.

The next day, the sun shone over San Diego in full force, as if the previous day had never happened. In the wake of this gorgeous weather, my host and I decided to take a drive by the city’s most popular beaches, including La Jolla, Sunset Cliffs, Coronado, and Ocean Beach. As we drove, we opened up about recent heartbreaks and our fear of being held back by our pain, despite agreeing that it no longer belonged in our lives. Feeling helpless and hungry for resolution, I asked my companion:

“How do you let go of the things that hurt you? How can you get your heart to align with your mind?” To which, without a beat of hesitation, she answered:

Her simple answer took me by surprise. While it is true that time loosens our grip over pain,how much time is completely contingent on our willingness to allow events in our lives to run their course. When we tie our expectations to external stimuli that are beyond our control – just as I did by predicting perfect weather – we are bound to be disappointed. The more we fight against the natural progression of events, the harder it becomes to move past them when they don’t go as anticipated.

Life events only have the power to emotionally chain us when we stubbornly hold on to the belief that things were supposed to go our way. What we too often fail to recognize is that when we stop taking events personally – that is, believing that they are unfair or shouldn’t have happened to us – we let go of the power they hold over our well-being. We cease being the effect of a situation (i.e. something bad happens, so we suffer), and reclaim the ability to become the cause (i.e. we’re happy and what happens next will be seen through that lens). 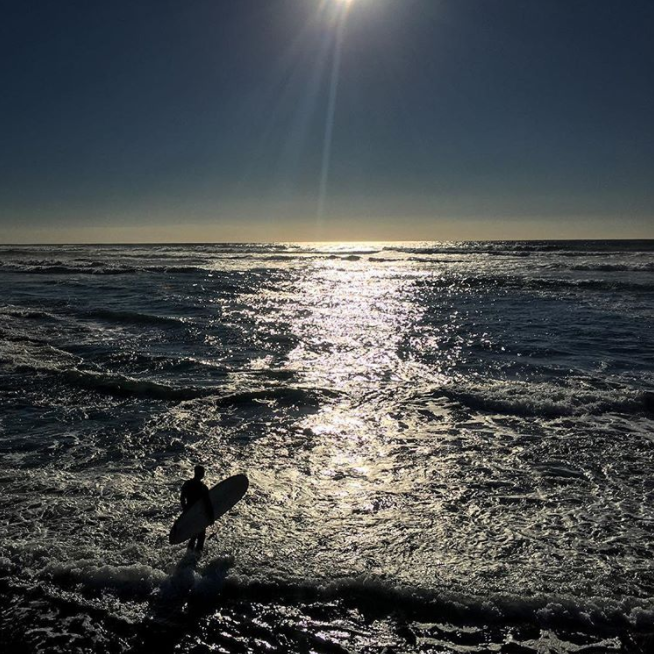 Step 2: Disassociate from your pain

San Diego is a mecca for the young and carefree. As I walked through downtown’s famous Gaslamp District, Little Italy, and the city’s extensive pier, I was taken aback by how people took the time to greet me and have conversations. The vibe was slow, friendly and relaxed everywhere I went. Even the city’s numerous homeless people, huddled in small groups along the streets, sang and laughed amongst one other. In this foreign place, I immediately felt like I had friends. I just hadn’t met them yet.

Breathing in San Diego’s at-ease atmosphere made me wonder why people, myself included, so adamantly choose to cling to worry. I briefly entertained the fantasy of how easy my life could be if I picked up from New York City and moved here. But of course, it’s not that simple: escaping doesn’t get rid of problems when we carry them with us wherever we go.

We all have personal struggles. What’s bizarre is how often we wear them like a badge of honor, as proof of how much we’ve suffered and overcome. Our life stories are peppered by elaborate tales of the people who hurt us, the injustices we were subjected to, and all those times that we were “right” and no one saw it. We naturally tend to deflect responsibility over the course of these events from ourselves, as it gives us the freedom to shape our story as we wish to see it. After all, a story that is not embellished by struggle couldn’t be as deliciously interesting or entertaining.

Letting go of what hurts us can be a threat to our very identity as it asks us to disassociate from our pain and the battle we underwent to earn it. We give up the freedom to blame others, to believe life is unfair to us, and to stubbornly hold on to opinions out of principle rather than accuracy. The truth is, remaining trapped in the prism of our problems – even when it is more beneficial to let them go – is comfortable. Our mind does not want to give up the familiarity of suffering, and it deeply fears loss more than the possibility of gain.

Buddha once said, “You can only lose what you cling to.” Letting go of the emotional attachments that cause our issues may feel like losing a piece of ourselves. Yet, who we are is not diminished by our lack of problems to identify with. On the contrary, when we cease to be dominated by our ego – the “self” and the corresponding story that we have crafted over the years – we set ourselves free. We let go of moldy beliefs, outdated emotions, and biased expectations, and as a result we cease experiencing loss. 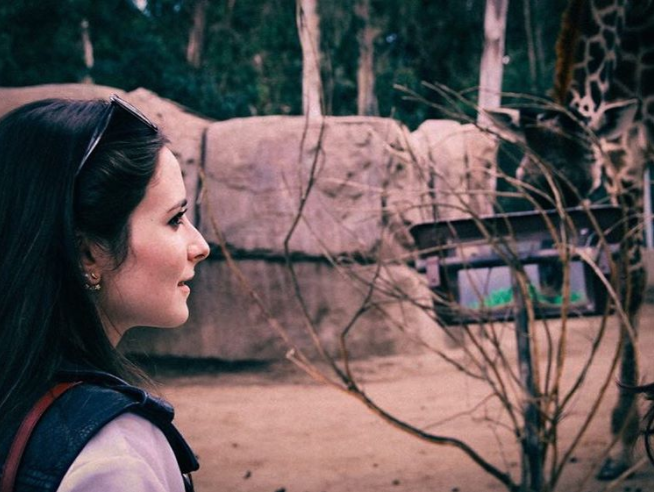 I spent my last day in San Diego touring the famous San Diego Zoo and gorgeous Balboa Park next door. My host, having visited innumerable times, had no interest in joining (I could relate as I have similar feelings when guests ask me to accompany them to Times Square). And so, off I went to see the pandas.

As I was exploring the zoo, I asked a stranger to take my photo. From there, a rapid friendship bloomed: it happened that he and his friend had recently moved to the city and were also exploring the park for the first time. I spent the rest of the afternoon with these two strangers, checking out exhibits I hadn’t originally intended to see and swapping stories about our respective lives. Did I expect to make friends on my visit to the zoo? No, and I probably would have had a great time by myself regardless. Yet, my visit was significantly enhanced from spending a serendipitous afternoon with two new friends.

Every time we go with the flow of events, even when we cannot predict the outcome, we are taking a tiny leap of faith. Much of the pain that keeps us from letting go is rooted in a fear that what’s on the other side isn’t better than what we know and have right now. If we can break away from that fear, we will find that almost every time, something better does come along to replace what we left behind.

Perhaps letting go is so difficult because it requires surrendering to the unknown. While suffering’s intimacy and familiarity makes it comforting to keep around, the unknown cannot be grasped or understood. We cope with fear far better than with uncertainty, and so we naturally recoil from what we don’t know.

The art of letting go asks us to blindly yet faithfully entrust that the emptiness ahead of us is okay. It is a leap of faith towards an abyss that is filled with as much potential for fear as there is for liberation. Even though we have no idea what lies beyond this chasm, we just have to believe that it will propel us to where we need to be. 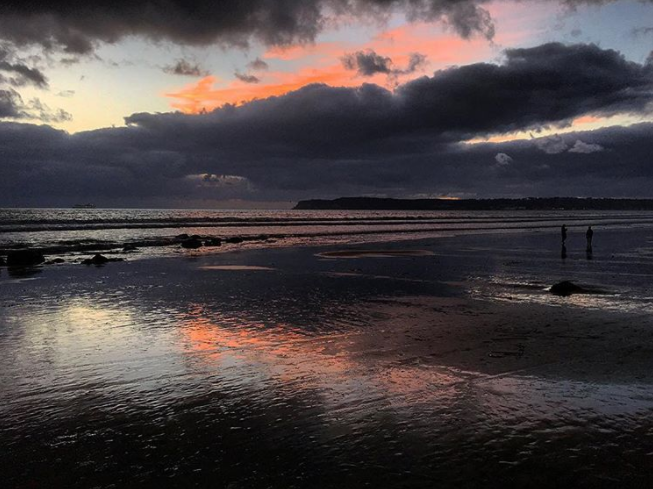 I came to San Diego trapped in a torrent of my own problems and was met by an easy, calm atmosphere, the unexpected friendship of strangers, and an inner push towards healing. Kindly and warmly, San Diego coaxed me to loosen my grasp over my distress and start letting go.

From afar, that emptiness we feel when we step away from our attachments, problems, and grief may seem terrifying. This fear loosens its hold once we realize that we are masters of our own happiness, and letting go gifts us the blank space to construct it. Infinite possibility and self-liberation lies beyond the comforts of our suffering – we won’t know just how much until we take the leap. A special thanks to my new friend who so warmly hosted me in San Diego and showed me an amazing time.