Throughout my travels, I’m constantly on the lookout for businesses that can balance financial success with a consciousness of how their development affects the world around them. My recent visit to the developing beach town of Nosara, Costa Rica, revealed that it is indeed possible for a business to change and evolve to meet market needs without sacrificing principles, vision, or purpose.

Olas Verdes is a prime example of a business which, as Nosara has become an increasingly touristy, expat spot, has needed to figure out how to thrive financially while adhering to sustainability practices. An interview with Luis Pardo, the General Manager of the property, reveals in detail the socio-economic development of this region and how businesses have managed to have a positive impact on the community and environment – while still making a profit.

Celinne Da Costa: Tell us about Nosara and the socio-economic changes it has undergone in the past few years.
Luis Pardo: Playa Guiones in Nosara is a small, multicultural yoga and surf community located in Guanacaste, the North Pacific side of Costa Rica. Due to the lifestyle and environment, it’s also part of one of the five Blue Zones, where people live longer and healthier than anywhere else on earth.

The remoteness and beauty of this previously Guanacastecan cattle area and fishing town attracted a few soul surfers, yogis, and adventure travelers who returned year after year. Today, Nosara has a large expat community partially because of the visitors who loved the area so much that they decided to call it home. With the locals, they contributed to wildlife preservation efforts, funded and volunteered for the fire department, and opened a private bilingual school. Before we knew it, a culturally and environmentally conscious community was created in one of the most interesting coastal towns of Costa Rica!

Nosara, which was previously isolated and poorly infrastructured (there were terrible roads and no bridges for many years), has a slow but steadily growing local economy where people have a shot at succeeding at entrepreneurship without facing the pressure of being displaced by giant competitors. When mega-projects hit low-pace economies, the communities generally become spectators of progress and potential candidates to the lower wage positions. These projects need to hit the floor running and have no time or tolerance for people to adapt or develop talent.

Nosara has been different in that respect, and holds one of the highest rankings for the 2017 Social Development Index for being a place with high quality of life and opportunity. For example, small grocery stores have grown into main supermarkets, almost every building has been constructed by local companies, and many Nosara natives are now successful business owners. 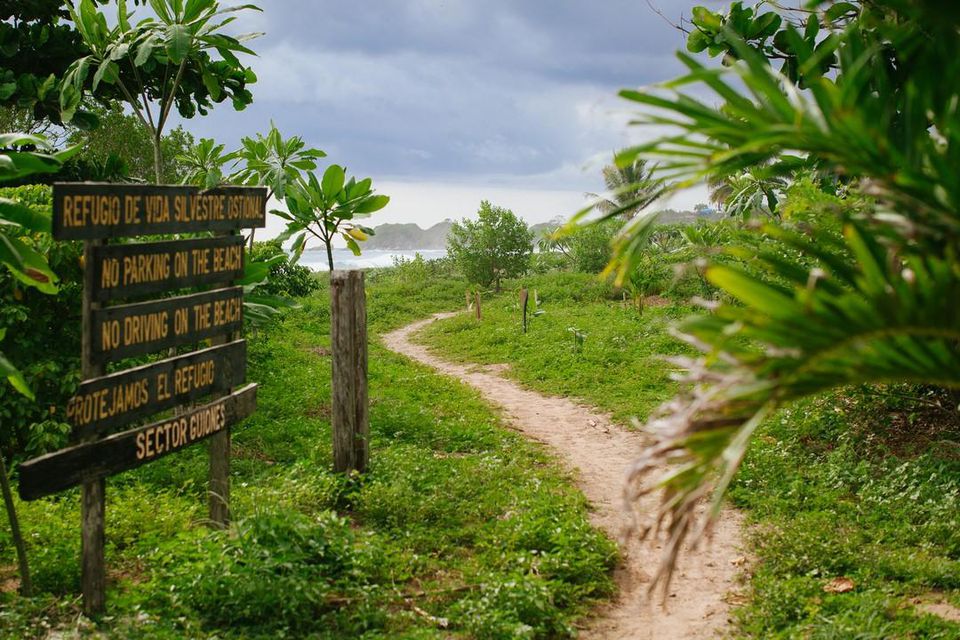 “The vision was clear from the beginning: to create a hotel establishment that was fully committed to minimizing negative impact on the environment while having a positive impact in Nosara.”

Da Costa: How have the local businesses evolved to meet tourism needs?
Pardo: The first lodging facilities in Playa Guiones were opened by people with a vision to move to a paradise beach, live in endless summer weather, breathe pollution-free air, eat fresh organic products, and be part of a dynamic community. Many didn’t have a clue about how to run this kind of business, but gave it a try and figured things out along the way.

Today, most of the hotels have between 4 and 30 rooms, which gives everyone the chance to grow and compete. In the beginning, services were very basic and limited. The hotels have improved significantly, along with the restaurants, yoga studios, surf schools, etc. Even so, most businesses have chosen to remain simple, laid-back, friendly, and environmentally conscious—that’s what makes Nosara so special.

The Olas Verdes project was conceived out of a philosophy to involve the community from the ground up. Normally when businesses have to “give back” to the community, it’s because they took something from it. This is not the case. The owners, which have been coming to Nosara for many years and were already implementing sustainable practices at the Safari Surf School since 1999, were invested in preserving the local environment and community.

The vision was clear from the beginning: to create a hotel establishment that was fully committed to minimizing the negative impact on the environment while having a positive impact in Nosara. Olas Verdes is aware of the responsibility it has of running an establishment near the fragile Wildlife Refuge area, and as a result, we built the first Platinum LEED certified hotel in Costa Rica (making it the first surf hotel in the world with this award) and have been granted the CST (Sustainable Tourism Certification) for our consistent sustainable practices.

These were challenging feats. Hotels and restaurants are amongst the biggest pollution and waste producers, and consumers will generally demand what works best for them—regardless of the environmental impact. It is the business’s call to draw the line, and that in itself can be a cost (e.g. lost revenue, investors not willing to risk it, etc). Little by little, you earn trust and attract responsible travelers, which make the efforts worthwhile in the long run. Running an environmentally friendly business is a continuous and challenging learning process, but very rewarding when done right.

Da Costa: How has the growing local economy made it more possible for women to thrive?
Pardo: In a country where upper management and entrepreneurship is traditionally male-dominated (especially in rural areas), it is interesting to see how some Nosara women are not only succeeding but being responsible and doing what is right. I’m particularly impressed by:

1. Ostional sea turtle egg harvesting: Every month, up to thousands of sea turtles arrive at Ostional Beach to lay their eggs. Unfortunately, many eggs end up broken and rotting, which can contaminate the healthy eggs. Government officials, the Universidad de Costa Rica (UCR), and the Asociacion de Desarrollo Integral de Ostional (ADIO), started a program back in 1987 for the sustainable use of the eggs. Through their work, this women-led association has helped protect the turtle population as well as support and raise their children, providing them with shelter and education.

2. El Manglar Restaurant: Alicia and Maritza are both from Nosara but have never managed a business. In 2015, they were offered the opportunity to open a restaurant at a hotel in Playa Guiones and they ran with it. They created El Manglar, a Costa Rican fusion restaurant named after the mangroves in the wildlife refuge just steps away. They equipped their kitchen with energy-efficient appliances and learned how to properly sort their waste, recyclables, and compostables. They’ve focused on sourcing from the local organic farms and using fresh ingredients produced in the area. Nearly 70% of their purchases are from local family-owned businesses (mostly women!). By integrating their cultural heritage into the dining experience, these women have found a unique selling point that is key to their success.

3. Nosara Recycling Center: In Nosara, there is no official waste management: most of it is thrown away in an empty property called “el botadero.” In 2008, a group of mostly women (locals and expats) created the Asociacion de Desechos y Reciclaje de Nosara, a recycling center to reduce the environmental damage. Although this voluntary organization hasn’t resolved for the government’s responsibility, their recycling efforts have made a huge impact on the community. It’s been admirable to see the courage and determination that these women have put forth to protect our community. 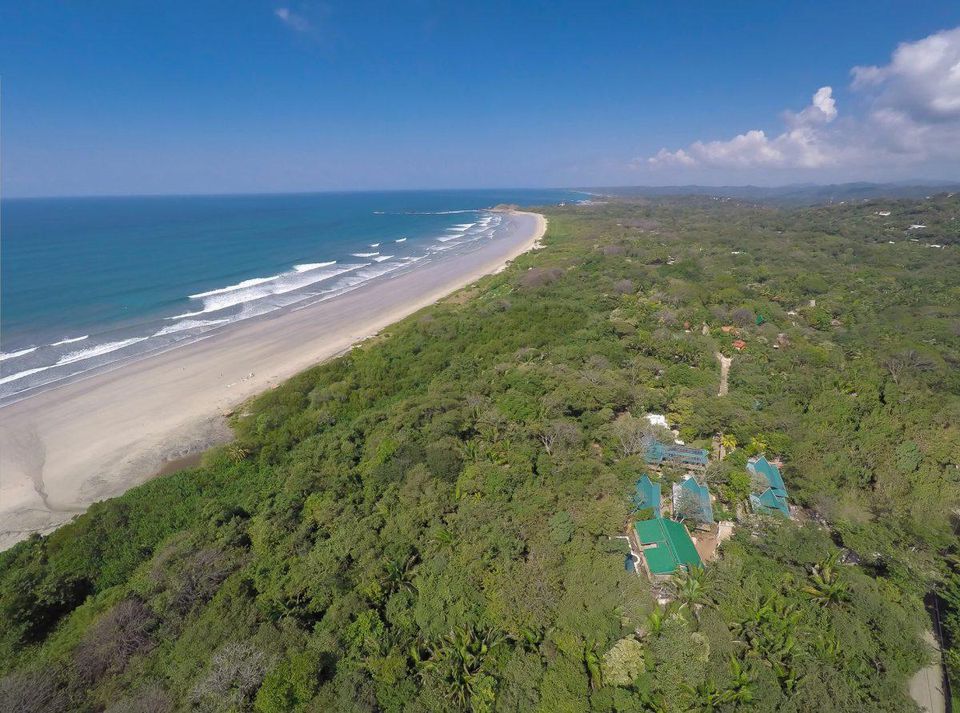 “Running an environmentally friendly business is a continuous and challenging learning process, but very rewarding when done right.”

Da Costa: What are the secrets to building a business that is sustainable and profitable?
Pardo: To be a sustainable business, you have to practice what you preach. There’s a reason that Olas Verdes Hotel is one of one of Nosara’s leaders in conservation: according to ASADA’s (the water company) monthly published reports, our water consumption is a third of hotels of similar size and occupancy and we produce 20% to 35% of our electric energy with solar panels. Despite our conversational efforts, profit still comes in. Since opening in December of 2015, Olas Verdes has impressively grown in sales, overperforming by 21% of what was projected during its first year of operation (2016), and closing 2017 with a 47% increase in sales. Our 2018 projections show that profits will continue increasing significantly, and we have the highest average occupancy rates amongst our competitors.

We have three core beliefs that we believe businesses should leverage to become both sustainable and profitable:

1. Empower your staff: Our staff is without a doubt the biggest differentiator from our competitors. They are all locals with diverse backgrounds but sharing values such as honesty, adaptability, and respect. When we hire, we focus on developing their skills according to who they are as people, instead of trying to change their personalities or make them memorize scripts. We want them to be proud of who they are and what they do.

2. Protect your values: We built this establishment on a specific set of values, and having clarity on those values allows us to uphold our mission. Our values were jointly created by our staff in 2015 and include equity, respect, social responsibility, authentic hospitality, empathy, and teamwork.

We recognize that Olas Verdes is not for everyone precisely because of our sustainability-focused values, and that’s okay. For example, we don’t have much of a nightlife, it’s a difficult area to get to, we don’t use strobes, and we do not offer beach chairs and umbrellas in an effort to preserve the natural look and feel of Playa Guiones. In return, you enjoy a simple, healthy lifestyle and a natural coastline full of nature and wild animals instead of restaurants and parking lots.

3. Awareness of the environment: We are aware that we need to take action that goes above and beyond minimizing the negative impact that global warming has had on our environment. This means paying attention to important details: for example, all our products and amenities are biodegradable, our water heating is solar, and we have cut our energy consumption by nearly 22% by not ironing the linens and not placing hair dryers in the suites. Guests are provided with complimentary bicycles to explore the town and encouraged not to rent vehicles, which has helped to reduce the carbon footprint while preserving air quality and a noise-free ambiance.

Costa Rica is known for its Pura Vida philosophy. Although it’s become a bit of a cheesy phrase, it still means a lot to us. It is a positive attitude towards our daily challenges and reality, as well as gratefulness for what we have. In Costa Rica, we believe that time is one of our most precious treasures. Sharing a moment of our lives with a person we just met, regardless of who it is, is part of our hospitable Pura Vida way.

With this approach in mind, our staff was hired because of their positive attitude, their non-verbal language, how they respond to sticky situations, their pride for their roots, and their big smiles. We are glad to have such a variety of personalities who are proud of their culture, essence, and personal achievements.

Living in a tiny country that is home to 5% of the biodiversity of the world has many benefits, but also a tremendous responsibility. Having a sustainable operation is no longer a choice—it is a commitment. As consumers, we have the power of changing business models by choosing those that stand by their vision and values.